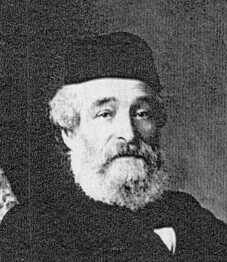 English Orientalist and theologian; born at Zülz, Prussian Silesia, 1809; died in London 1888. He was educated at the yeshibot of Lissa, Nikolsburg, Presburg, and at the University of Berlin. Stopping at Hamburg on his way to London, he was entrusted with the classificationof the Oriental coins in the Sprewitz cabinet. Soon after his arrival in London he was introduced to the Duke of Sussex, who in 1839 appointed him his "Orientalist." He then traveled in the East, where he studied Arabic, Persian, Coptic, Nubian, Turkish, and Circassian. In Cairo he was presented to the khedive, Mohammed Ali Pasha, for whom he translated some hieroglyphic inscriptions. While in Palestine he was attacked by Bedouins, who took everything he had with him, including his collections and note-books. On his return he met at Rome Sir Moses and Lady Montefiore, who invited him to travel with them to the Holy Land. When in 1840 Sir Moses went on his Damascus expedition, Loewe accompanied him as his interpreter. In the firman granted for the relief of the accused, Loewe discovered that the word "pardon" ("'afw") was used instead of "acquittal," and it was due to Sir Moses' exertions that the change to "acquittal" was made.

Altogether, Loewe accompanied Sir Moses Montefiore on nine different philanthropic missions. When Jews' College was opened in 1856, he was nominated principal; and when Sir Moses Montefiore opened a theological college at Ramsgate in 1869, he made his friend principal of that institution, which position Loewe retained until three years after the death of his patron.

Loewe wrote: "The Origin of the Egyptian Language," London, 1837; a translation of J. B. Levinsohn's "Efes Dammim," ib. 1841; a translation of David Nieto's "Ma??eh Dan," ib. 1842 (awarded the York Medal); "Observations on a Unique Coptic Gold Coin," 1849; a dictionary of the Circassian language, 1854; as well as several sermons and a Nubian grammar (the latter still in manuscript).

The trip Louis made to Damascus was particularly important. In 1840, a Catholic Cappucine priest Tommaso, who often was seen among Arabs, was reported missing. Suspicion fell upon the Jews of Damascus. One Jew after the other was arrested, falsely accused of the murder of Tammaso, and through unspeakable tortures forced to make "confessions" that implicated more and more Jews, finally reaching the chief rabbi and the richest Jews of Damascus. They were accused of the old, fabled ritual murder -- the charge that Jews needed Christian blood in the baking of Matzot.

The letter from Montefiore to Louis reproduced below appears to have been written shortly after that trip.

At that time Mehmet Ali was the ruler of most of the Middle East, including Egypt and Syria.

I have aquired the copy of his "Dicitionary of the Circassian Language" that he originally presented to Joseph Bonomi, the Curator of Sir John Soane's Museum (well worth a visit if you're in London) and who was himself (like Soane) a noted Egyptologist.

Whilst I do not have the language skills to appreciate it properly it is incredible to think of the skills involved in both writing and printing it. Some pages are reproduced below.

Loewe was also acquainted wih the surgeon Egyptologist (and theatrical "Mummy Unroller"!) James Pettigrew, to whom he turned for letters of introduction, testimonials and medical advice. Loewe's letters to Pettigrew are preserved in the Beinecke Rare Book and Manuscript Library of Yale University Library, to which I am grateful for the copies reproduced below. In 1839 he was appointed as the Duke Of Sussex's "Orientalist," but it is clear from these letters (1837? to 1846) that Louis was keen to secure further preferment. At the time he was living in London at Mansell Street, and later Great Alie Street, in the Jewish area to the East of the City of London, less than a mile from my present home. They make interesting, if difficult, reading.

A "potted history" of Louis' life may be gained from the following Obituary from "The Jewish Standard."

The materials for the biography of the great scholar and good man, who has just left us, are perhaps more abundant than for any of his contemporaries, except the never-to-be-forgotten philanthropist, Sir Moses Montefiore, whose friend and companion he was for upwards of fifty years. Again and again it has been told by sympathetic pens at all lengths and in all shapes, for it was the career of a man who combined a European reputation for encyclopaedic scholarship with something of the adventurous experiences of a Burnaby or a Burton.

His connection with Sir Moses Montefiore, which, as anyone reading the diary of Lady Montefiore can see, was of the closest, secures him a second immortality, of which however, he does not stand in need. He was born at ZuIz, in Prussian Silesia, in 1809. He was educated at Rosenberg, in Silesia, subsequently at the Theological Colleges of Lissa, Nicholsburg and Pressburg, and at the University of Berlin. A desire to study Oriental languages led him from Berlin to London. There he became a naturalised British. subject, and was appointed in 1839 Hebrew lecturer and Oriental linguist to the late Duke of Sussex. In 1853 he was appointed principal of the Jews' College, then situated in Finsbury Square; in 1858 examiner for Oriental languages of the Royal College of Preceptors; and in 1868 principal and director of the Theological College at Ramsgate. But these last responsible positions were the distinctions of his maturity. The Duke of Sussex gave him letters to the professors at Cambridge, and Sir Francis Palgrave to those of Oxford. At both Universities he continued his studies. He then went to Paris, where he became a member of the Asiatic and Philological Societies, and was introduced to Admiral Sir Sydney Smith. Under his auspices he travelled much In the East, and acquired a full knowledge of the Arabic, Coptic, Nubian, Turkish, Persian and Circassian languages and literatures. At Alexandria lie delivered letters of introduction from Sir S. Smith to the Viceroy Mehemet Ali, for whom he translated some hieroglyphic inscriptions. Near Zafed, in the Holy Land,. he was ill-treated and robbed by the Druses, and so had to continue his journey disguised as a Bed'awee. On his return from the East, Dr. Loewe continued his studies at Rome There he met Sir Moses and Lady Montefiore, who invited him to accompany them on their journey to the Holy Land. This offer he accepted. Thenceforward he accompanied Sir Moses on nine of his Eastern missions, and also on those to Russia, Poland, Roumania, and Rome. Dr. Loewe was master of no less than thirty-nine languages. Among the products of his gigantic literary industry we may mention:

The Origin of the Egyptian Language Proved by the Analysis of that, and the Hebrew," in the Asiatic Journal (1837); a translation of J. B. Levinsohn's “Efes Dammim”, a series of conversations at Jerusalem between a patriarch of the Greek Church and a Chief Rabbi Of the Jews (1811); “Matteh Dan," being a supplement to the book “Kuzari” (1872); " Briefe, aus dem Orient " (Letters from. the East); Observations on a Unique Cufic Gold Coin," issued by AI-Aamir Beakheam Allah, Abu Ali Manzour Ben Mustali, tenth Caliph of the Fatimite dynasty (1849); "A Dictionary of the Circassian Language” (1854); a “Memoir of the Lemlen Medal " (1857); to say nothing of numerous discourses and. papers in the “Transactions" of numerous learned societies.

Perhaps the work by which he will be best-known to the Jewish public at large is his biography of Sir Moses Montefiore, which, of course no man could be more fitted to write than the man who was the venerable baronet's fidus Achates, and who conducted the correspondence of that much-addressed philanthropist in almost every language under the sun.

" In private life," writes to us one who was at one time his pupil, he displayed a ready courtesy and politeness of manner. which, was really 'of the old school' towards everyone with whom he came in contact. His devotion to the strictest principles of our religion was both touching and inspiring. In the, latter years of his life at Ramsgate the old man would never miss attending the synagogue on Monday and Thursday mornings, although his residence was more than a mile off. On the Sabbath his venerable figure was very rarely absent from its accustomed seat, althouch he had then of course to walk both ways. During the last few months his has become a familiar personality at the Bayswator Synagogue. He always retained a warm interest in Palestine and its inhabitants, so many of who were among his correspondents that he advertised his recent change of address in the (Hebrew) for their benefit.

The funeral of the late Dr. Loewe took place last Wednesday at the cemetery at Willesden. There was a very large attendance of friends both at the house of the deceased and at the grave. Amongst these were the following gentlemen:- The Delegate Chief Itabbi, the Rev. Dr. Gaster the Rev. A. Lowy, the Rev. R. Muntz, the Rev. H Gollancz, the Rev. S. Roco, Dr. A Cohen, Dr. Albert Kisch, Messrs. J. Sebag-Montefiore, Israel Abrahams, S. Sebag, E. W. Lindo, I. Spielman, S. S. Oppenheim, M. Castello, M. N. Adler, M.A, Elkan Adler, M.A., &-c. The cortege was also followed by a large number of private earriages. Owing to the bitterly cold weather no oration was delivered at the grave. The ordinary services for the dead were read very impressively by the Rev. R. Harris after which come earth from the Valley of Jehoshaphat was sprinkled on the coffin. The chief mourners were Messrs. James and Solornon Loewe, Dr. Adolph Kurrein of Teplitz, Bohemia, a son-in-law of the deceased, had not been able to reach. London in time for the funeral, but arrived afterwards. Messrs. Wollrauch and Cohen, of the New English Beth Hamidrash voluntarily acted as watchers froin the time of Dr. Loewe,'s death until Wednesday. The Delegate Chief Rabbi read the service, aud some Perokim from the Mishna at the house of the deceased in the evening, on which occasion a large number of gentlemen well-known in the community again assembled.