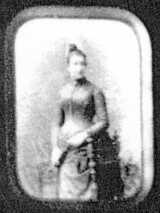 Jessie was originally named "Gittel," the same name as Louis Loewe's mother. She was the third child, and their first daughter. I have all six volumes of the prayer books she was given, at a time when the family was living in Brighton, shortly after her 16th birthday in 1859. I would welcome a translation of the Hebrew inscription!

Jessie was 28 when she married Adolf Kurrein. At that time, 1877, he was the Rabbi at Linz. As yet I have no idea how they met.

However, it is clear that Jessie was a very accomplished young woman. Shortly after the Battle of Sedan and Napoleon III's surrender in the Franco-Prusian war (and the declaration of the French Republic on 5th September 1870) she was largely responsible for organising a fund-raising concert in Broadstairs. Not only did she organise it, she appears to have been one of the stars! I assume that the funds were being raised for the Prussians, particularly so in light of the Loewe connection and the fact that England had threatened to intervene if France (or any German state) invaded Belgium. The following three brief reviews appeared. "Mdlle. Loewe de Paris" appears to be a relation, but is otherwise unidentified.

BROADSTAIRS. - An amateur concert in aid of the National Fund for the sick and wounded in the war was held at this fashionable watering place on Monday evening last, under the distinguished patronage of the. Countess Dundonald and Sir Moses Montefiore, Bart., who both honoured the entertainment with their presence. The assembly rooms were crowded with a large and very select audience, among whom were not a few of the Jewish community. The management of the concert was entrusted to Miss Loewe, daughter of Dr. Loewe of Broadstairs, and we must congratulate her on the marked success that attended her exertions. Her brilliant performances on the piano won the enthusiastic applause of the audience, while the charming song “Pourquoi," composed by the Baroness de Rothschild, produced a marked sensation. We are glad to learn that the funds of the Association were materially benefitted by the proceedings.


CONCERT IN AID OF THE SICK AND WOUNDED. - A concert under distinguished patronage was given at the Assembly Rooms, on Monday evening last, upon which occasion there was a fashionable and appreciative audience. Among those present we noticed the Countess Dundonald, Sir M. Monteflore. Bart., Countess Davidor, Lord Cholmondeley, Mr. B. Monteflore, Mrs. B. Gompertz, Mrs. N. Cohen, Dr. and Mrs. Loewe, Rev. - Hine and daughter, Rev. C. F. Tarver, Mr. A. De Sola, Mr.. and Mrs. B. Sicklemore, Mrs. Canham, Miss Lucas, the Misses Myers, &c., &c. The programme opened with Jubel Overture, which wad given by Miss Loewe and Mr. Pollard; the song “Oh haste ye Birds"` (Mddle. Loewe de Paris), was rendered with great effect, and met with a deserved encore; and a duet “Crudel Perche " by Miss Collins and Mr. Pollard, was well received. Solos pianoforte “Si ciseau j'etais," valse in A flat, was given by Miss Jessie Loewe, and gained considerable applause. This young lady is gifted with very high musical talent, and has great power of execution. Aria “Fanciulle che il core," was rendered by Miss Collins, and met with well earned applause; as also a duet “la vie, e t’ame " given by Mr. Pollard and Mrs. C. Wilson. A trio “Sweet is the breath of Morning," Mdlle. Loewe de Paris, Miss Collins, and Mr. Pollard, was for the first time sung in England. and we cannot speak too highly of the composition. Its execution was brilliant, it was hailed with outbursts of applause, and will be a great favourite. The fire-side song. “Come back to Erin," by Mrs. Carus-Wilson received an encore, and the cauzonet “The Blind Girl ,” given by Miss Collins, was similarly honoured. We must not allow this occasion to pass off without congratulating Mr. Pollard upon his composition. Song “The Stirrup Cup" by Mr. Pollard, and song “Pourquoi” Mddle. Loewe de Paris (who was again encored); duet “I love the Sunny Meadows," by Miss Collins and Mddle. Loewe de Paris were each received with the heartiest applause, and “God Save the Queen;" by the above two young ladies, in which the audience was requested to join in chorus, brought the concert to a conclusion. We must not omit to mention that, the success of the concert was mainly due to the untiring exertions of Miss Jessie Loewe of Broadstairs.


An amateur concert of no ordinary excellence, in aid of the sick and wounded in the war, took place, under the direction of Mr. Pollard, the talented organist of St. George's Church, Ramsgate, at the Assembly Rooms, Broadstairs, on Monday evening. The arrangements of this excellent concert were at a short notice principally undertaken by Miss Loewe; this lady being kindly assisted by Miss Collins and other ladies, and who, by their singing and playing contributed greatly to the success of the concert. Among the company present we noticed, the Countess Dundonald and family, Sir Moses Montefiore, Bart., Mrs. Gompertz; Mrs Nathaniel Monteflore, Miss Lucas, Mr. B. Monteflore, Count D'Avidor, Mr. Latham Tomlin, Mrs. Carr, Miss Lamb, Mr. and Mrs. Henry Wilkin, Mr. and, Miss Crampton, Mr. Raven, Captain and Mrs. Elyard, Mr. Elyard, Mr. Manser, Miss Blackburn, Mr. and Mrs. Edwards; Mr. P. Anderson. Rev. G. W. and Mrs. Sicklemore, Mr. and Mrs. B. Sicklemore, Mrs. and Mrs Jackson, Dr. and Mrs. Loewe, Mr. and the Misses Walter, Lord Cholmondely. The room was crowded, and several applications for tickets could not be acceeded to. The first part of. the concert was entirely classical, and commenced with Weber's grand overture of “Jubel,” which was exceedingly well played by Miss Loewe, and received a well-merited applause. " Oh haste ye birds," by Gumbert, was charmingly sung by Mdlle. Loewe, her contralto voice appears to have been well trained, and gives great promise. “Crudel. Perche," by Mozart, was splendidly given by Miss Collins and Mr. Pollard. The solo of the pianoforte “Si ciscau j’etais," “Valse in A flat," was an excellent-contribution to the concert, by Miss Loewe and Mr. Pollard. The aria “Fanciulle che il. core,". by Meyerbeer, was sung by Miss Collins, and. rapturously encored. This young lady possesses a very sweet and highly cultivated mezzo-soprano voice. The duet, "Io yio, e t’ame," by Campana, was well sung by Mrs. Carus Wilson and Mr. Pollard.

The second part of the concert was confined to light and pleasing music. It commenced with the trio "Sweet is the breath of morning," by Muller, charmingly rendered by Mdlle. Loewe, Miss Collins and Mr. Pollard, and was deservedly encored. Mrs Carus Wilson then sang “Come back to Erin" in her usual sweet and sympathetic manner, and was greeted with hearty applause, after which the “March Triumphante do Concert,"` by Wollenhaupt was most effectually played by Miss Loewe, the fair performer giving what this piece requires, great execution, and at the same time taste and expression. The "Blind Girl," by Pollard, was beautifully sung by Miss Collins, and encored. The "Stirrup Cup" was well sung by Mr. Pollard, who displayed an excellent baritone voice. “Porquoi,” by the Baroness Rothschild, was sung most effectively by Mdlle. Loewe, and encored. The duet “I love the sunny meadows" by Glover, was sung by Miss Collins and Mdlle. Loewe, and was much appreciated by the audience, The National Anthem concluded a most successful and agreeable concert. The grand piano forte was kindly lent for the occasion by Messrs. Broadwood, of London. The proceeds of the concert amounted to about £25.

Adolf and Jessie later lived in Teplitz (Teplice). It was while living here that Jessie received a "Thank You" letter from Sir Moses Montefiore for her "felicitations" on his 100th birthday. Although obviously written by a secretary, I feel sure that the language is his own. 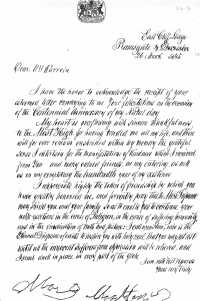 Jessie also appears to have been a very stylish lady, as this contemporary portrait shows. 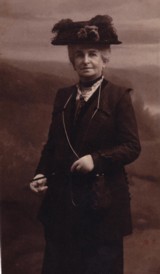 Jessie survived Adolf by almost 15 years. The photograph below was taken in 1931 at my father's (Fred (Fritz) Kurrein) bar mitzvah in Berlin. He was her first grandson. 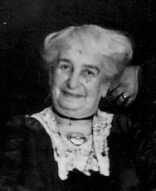