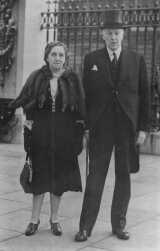 Basil & Rose, in 1948, leaving Buckingham Palace after his investiture.

Basil Lucas Quixano Henriques (1890-1961) was a key figure in the Boys' Club movement and within Jewish youth work. His book Club Leadership (1933) was a deeply influential statement of the principles and practices of boys' club work. His work in setting up, and working as the warden of, the Baron Baron St George's Jewish Settlement touched many people's lives in East London.

Works of interest are:-

Henriques, Basil L. Q. (1937) Indiscretions of a Warden, London: Methuen. Some reflections on his life and his work setting up the Baron Baron St George's Jewish Settlement.

Henriques, Basil L. Q. (1950) The indiscretions of a magistrate : thoughts on the work of the juvenile court, London: Harrap. 192 pages.

Loewe, L. L. (1976) Basil Henriques. A portrait based on his diaries, letters and speeches, as collated by his widow, Rose Henriques, London: Routledge and Kegan Paul. 181 + x pages. Provides a useful insight into his life.

THE OXFORD AND ST. GEORGE'S CLUBS.

In the early part of the 20th century The East End of London was densely packed with Jews. Some streets had 95 to 100% Jewish occupancy. Most of these were recent immigrants from Russia and Poland who had come to escape the anti-Semitism and the pogroms there. Living conditions were appalling.

Families were crowded together in bad quality housing, without a bath or an inside toilet. Some racist politicians spoke of "The Jewish Problem", accusing the Jews of taking jobs and housing from native-born Englishmen and also of creating a crime wave. The Jews were accused of being alien because they spoke Yiddish and because they had peculiar customs.

One person who helped to change the situation was a young man called Basil Henriques, who came down from Oxford University and founded a boys club in premises in Cannon Street Road. The club was called Oxford and St George's, and opened in 1914, a few months before the start of the 1st World War. (Oxford from the university and St George's from the area of East London where the club was situated.) In 1915 Rose Loewe started a parallel girls club.

Basil and Rose married in 1917. Captain Basil Henriques returned from the war after a distinguished career in the Tank Corps, where he commanded one of the first tanks ever to engage in battle. In 1919 Basil and Rose Henriques started the St Georges Jewish Settlement in Betts Street. They lived on the premises and ran the clubs there. They were affectionately known as The Gaffer and The Missus.

The clubs were not just social. They were educational, and taught sports, acting, ballet, physical education, First Aid, etc. They helped to prepare the boys and girls to enter into the British way of life and so helped them in eventually seeking careers. At the same time they gave them a modern outlook upon Judaism and their Jewish heritage. The highlight of the year was the Annual Summer Camps. The clubs took several hundred Jewish children away for a holiday under canvas each year. For many youngsters this was the only time that they left inner city London. Many of these annual camps were at Highdown near Goring by Sea. The boys and the girls went to separate camps. These camps were enjoyed so much that the old boys continued going to camps for many years after they had grown up. In fact, some of the Old Boys and Girls still (in 1998) have an annual holiday together, although they call it camp, it is now in an hotel.

In 1929 the clubs moved to a large building in Berners Street. A cigarette manufacturer named Bernhard Baron donated money for the purchase of an old school building. The flat roof was converted into a play area with netting over the top so that ball games could be played. (The top row of what look like rectangular windows in the picture, are gaps in the brickwork of the parapet of the roof area.) There was a well-equipped gym and many other facilities. The building was known as the Bernhard Baron Settlement. As a settlement, it catered for Jewish needs from the cradle to the grave. It had a clinic for expectant mothers and other patients, a kindergarten, youth clubs, parents groups. And the Settlement Synagogue had religion classes, adult activities and a burial scheme. In between there was a Boot Club, which helped to provide footwear for children in families who could not afford it, and there was a Poor Man's Lawyer scheme where people could get free legal advice.

The club was particularly renowned for its sporting successes. The clubs had teams for Cricket, Football, Netball and Hockey. They entered Swimming, PT, Table Tennis and Boxing competitions and gave coaching in all of these. They produced several boxers who gained titles like Harry Mizler and Kid Berg. (The well equipped shower room proved to be an attraction for youngsters who either had either to go to the public baths or bathe in a tin bath in their living room.) The clubs succeeded in creating a tremendous club spirit, which lasted long after their youth. They had their own club cry based upon a Maori chant.

During the 2nd World War 600 old boys and girls served in the British forces. the Gaffer used to keep in touch with all of them and later published a book of some of this correspondence. Basil Henriques became a magistrate specialising in juvenile cases and eventually received a knighthood. The Gaffer died in 1961. He was a most impressive figure being 6 foot 4 inches tall. His wife was very short, but with a very strong personality. She was artistic and played both the piano and the organ. She produced a Club Song Book which contained 176 songs where she had written new words set to old tunes.

The clubs were very successful in teaching the young generation how to get on in the world and it instilled in them an ambition to better themselves. By doing this it helped in its own demise. One result was that many Jews left the crowded insanitary conditions of the East End, to live and work in more prosperous areas. Eventually, in 1973, the Bernhard Baron Settlement was sold and the clubs moved to Totteridge in North London.

Although the building is now (2002) vacant and somewhat dilapidated, the commemorative plaque is still in place.

Rose should not be overlooked! Quite apart from opening and running a Girl's Club from 1915 she was a tireless worker for good causes. The following article on "Liberal Jewish Personalities" (No. 16) appeared in 1967

IT IS HARD to believe that Rose Henriques is 80. This is not only because of her boundless vitality, but because she belongs equally to two generations of Anglo-Jewish social workers. The first is that of the great personalities and pioneers - of her late husband Basil, Lily Montagu, Alice Model, Mirlarn Moses - whose work was mainly with the children of poor Jewish immigrants in this country; the second, that of the post-war professionals whose concerns are with the remnants of Jewish communities overseas.

Born a Loewe, she grew up in a cultured Orthodox home, and was gifted in both music and painting. But shortly after Basil Henriques founded the Oxford and St George's Jewish Lads' Club in Whitechapel in 1914, Rose became a club help and then director of a newly-formed companion Girls' Club. In 1916 she and Basil were married and, while he served in the Army, she directed both the clubs and the settlement attached to them and acted as Red Cross nurse during air-raids.

Shortly after the War, in 1919, they founded together the St George's Settlement Synagogue. As the Settlement was sponsored jointly by the 'West London and Liberal Jewish Synagogues, its Synagogue, while using its own prayer book, naturally affiliated to both the Reform and Liberal movements. Throughout the years it has remained an example of practical co-operation between the two.

The Henriques' was a perfect partnership. As Basil grew in stature as a social worker, as a leader and expert in the national Boys' Club movement, and as a juvenile court magistrate, his wife's help and enterprise became increasingly valuable, especially in the Girls' Club movement. With financial help from the late Bernhard Baron, their own foundation became the Bernhard Baron St George's Jewish Settlement, a model of its kind. Rose directed the girls' clubs, teaching music and ballet. In the Synagogue, she trained and directed a choir of club girls and played the organ.

Her compassion, however, was not only for the young. She realised the value to the elderly of continued work, and established a shelter workroom for them. This is now run by the Local Authority. In the second world war she was first an ambulance officer and then an air raid warden which, in the East End, required much courage. At the end of the war Rose Henriques led the first team of Anglo-Jewish volunteer social workers, doctors and nurses. to enter Germany. She established her unit at Celle, near the Bergen-Belsen concentration camp, and eventually set-up others all over the British zone. And just as at ironic, she established a synagogue at the centre. The teams worked ceaselessly, not only for the camp survivors but for the stream of refugees coming from Eastern Europe and for the re-establishment of the remnants of the German-Jewish communities. Rose Henriques gave leadership and impetus to this work of rescue and rehabilitation for a number of years.

More recently she has been concerned with work overseas. As chairman of the British OSE, she has brought Jewish student nurses from Morocco, Iran and elsewhere to the London Jewish Hospital for training. Through her efforts OSE has set up medical units for the Falashas in Ethiopia.

Lady Henriques (her husband was knighted) holds office in numerous Jewish and non-Jewish organisations. She is Vice Chairman of British ORT, a former President of the League of Jewish Women, Vice-President of International Social Service (British Branch), an executive member of the British Council for Aid to Refugees, and Treasurer of the Whitechapel Art Gallery - to name but a few.

She has broadcast many times for the BBC on life in Stepney and other subjects. She is a considerable artist, and still paints. A collection of her sketches of Stepney was bought by the Pilgrim Trust for the London Museum and the Whitechapel Art Gallery.

One can only. marvel how one person could accomplish so much for so many.